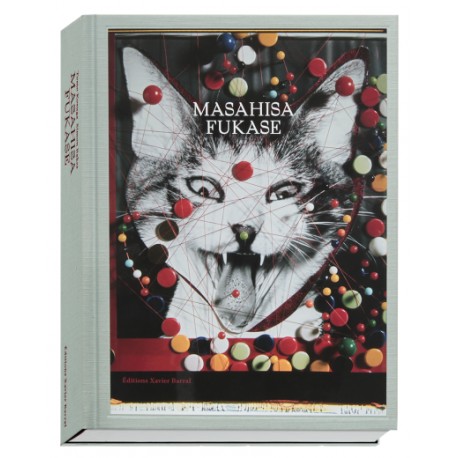 .French and English versions both available.

"Japanese photographer Masahisa Fukase is among the most radical and original of his generation, famous for The Solitude of Ravens, in which these birds of doom, in flocks or alone, blacken the pages cover to cover of his legendary book released in 1986. He also has a lesser-known, multifaceted corpus: formal research, superimposition, collages, self-portraits, photographs reworked as sketches, black-and-white prints, Polaroids, and more.

This monograph brings together for the very first time all of his artistic work presented over 26 series, including the ones dedicated to his father (« Memories of Father »); without forgetting his series on cats, including his own, Sasuke; and his famous self-portraits taken in a bathtub, with a waterproof camera (« Bukubuku ») or in pairs (« Berobero ») touching tongues, which he later coloured.

Essays by Simon Baker, director of the Maison Européenne de la Photographie, and Tomo Kosuga, director of the Masahisa Fukase Archives, shed light on Fukase’s multifaceted oeuvre which dramaturgy is tinged as much with irony as with provocation. "

This book is a restrospective of the work of one of the most important Japanese photographer, Masahisa Fukase, and also the catalogue of the exhibition Private Scenes at FOAM, Amsterdam, held from September 7th to December 12th, 2018.

This book is offered in two distinct versions: French and English.

Before adding it to your cart, please use the "Edition choice" drop-down menu available below the price to make your selection.