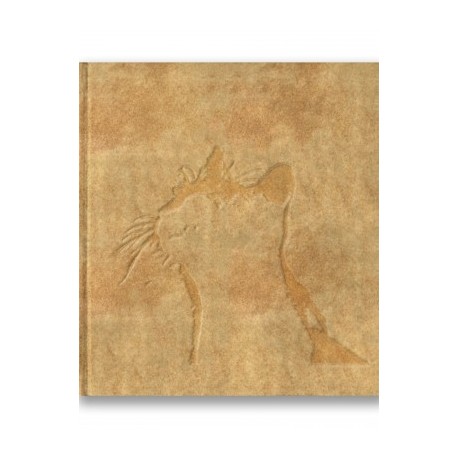 "Afterword is composed of photos used in the afterword ’Sasuke’s Diary’ from Sasuke, My Dear Cat, published by Seinen Shokan in 1978. In the small pocket-sized printing manuscript were instructions and numbering written by Fukase himself.

Sasuke the First went missing quite early on, but some time afterwards, someone who had seen the ‘missing’ posters delivered a kitten to Fukase thinking it was probably Sasuke. While they did indeed look alike, the kitten turned out not to be Sasuke after all.

Fukase, however, named this kitten Sasuke and ended up loving him like his own. To Harajuku, on express trains, and even to Ueno Zoo and the seaside - he took Sasuke out with him wherever he went. Referring to himself ‘papa’ while turning his camera upon Sasuke, the depth of Fukase’s affection for his cat can be felt through his photos of its charming visage.

A near-maddening amount of lovely scenes continue page turn after page turn in this wonderful photo book - a masterpiece that belongs on the shelf of a loved one."

The love of Masahisa Fukase for his cats, and for his cat named Sasuke, a name born by several of his cats...

Texts in English and Japanese, including the text "Sasuke Diary" presented in a separate booklet inserted in the book.

Masahisa Fukase , the Japanese photographer of the " Ravens ", was born in 1934 near Hokkaido and died in 2012 after 20 years of coma. His photos are the projection of his inner darkness, a visually fascinating autobiographical work. Photo: © self-portrait
See all the books of Fukase, Masahisa: 7