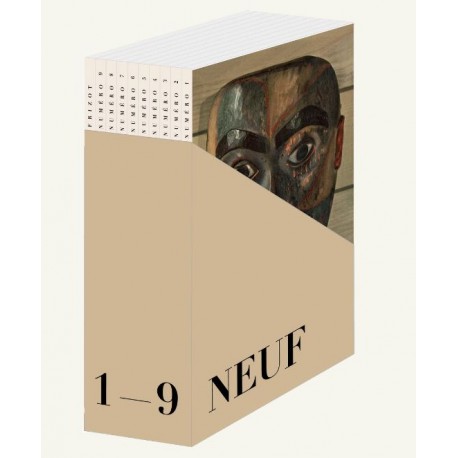 PLEASE NOTE: Outside of the additional booklet containing the text "Delpire before Delpire" translated into English (see description below), all publications in this set are IN FRENCH ONLY.

" 1950: Robert Delpire is 24 years old. As a medical student, he creates the magazine NEUF, distributed by the Maison de la Médecine. This is the beginning of a unique editorial adventure which will last 3 years and... 9 issues, and that will ultimately lead to the creation of the publishing house Delpire Éditeur in 1953.

NEUF is an avant-garde magazine that embodies all the artistic and intellectual excitement of the 1950s, giving a central place to photography and its authors. No public collection owns all the issues of the magazine. The largest known ensemble, kept at the Bibliothèque Nationale de France, remains incomplete.

The publication of these facsimiles, 70 years after their first edition, finally makes all of NEUF accessible to enthusiasts and the general public.

In July 2021, Delpire & Co presented at the Rencontres d’Arles festival the exhibition NEUF de A à Z (Espace Van Gogh), and published in a limited edition box set the 9 issues of the magazine, as presented here.

This box set brings together the 9 issues and the special publication of the art critic Michel Ragon, Expression and Non-Figuration (1951). An essay by photography historian, Michel Frizot, dedicated to this foundational adventure of French photographic publishing, completes this reissue. "

- Essay by Michel Frizot "Delpire before Delpire", illustrated with numerous images of other publications by Delpire, with a complete translation of the essay in English - 72 pages

PLEASE NOTE: Outside of the added booklet containing the text "Delpire before Delpire" above, all publications are IN FRENCH ONLY.

Books presenting the work of a group of photographers, either working on a common project, or assembled by the publisher for the purpose of the book.
See all the books of Collectif: 80

See all the books of Delpire: 2