" Richard Rothman's Town of C is a photographic meditation on what lies beneath the unsettling surface of American culture, as seen through the lens of a small town along the Front Range of Southern Colorado's Rocky Mountains.

Rooted in the tradition of the socially critical photography books that have taken America as their subject  — Walker Evans' American Photographs, Robert Frank's The Americans, and Robert Adams' What We Bought, among them — Town of C both encompasses and expands on the American theme, provoking thoughts about the larger environment. It begins with a prologue of alternating titles and images that announce the elemental forces of nature: water, and the source of the river that runs through the town; the region’s tectonics and the mountains that have risen above them to shape and frame the landscape; and light, the source of energy that fuels life itself.

The increasingly dystopian American experience is placed within the larger context of our disturbed presence in the world. The book, a novel-like, sustained visual narrative, attempts to penetrate and reveal the heart of a small town and, by extension, the culture it has sprung from and the lives of the people who have shaped that culture, and who are in turn shaped by it.

Varied, wide-ranging portraits span generations and classes, from infants to the elderly, from the homeless to the wealthy. They bear witness to the struggle to survive and ascend, and attest to an eternal hunger for unrequited longings that fuel human interaction in unpredictable ways. The tragic nature of the human condition explored in the portraits, nudes, and altered landscape of C is set against the rapturous beauty of a vanishing natural world still capable of generating awe, wonder, and a reverence for life. "

This photobook is sold out by the publisher. 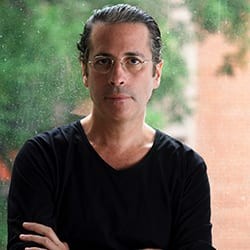 Richard Rothman is an American photographer and Guggenheim Fellow. His work has been published in big name American magazines and newspapers such as The New York Times, The New Yorker, Time, The Village Voice and is included in permanent collections of important museums and institutions worldwide (e.g. MoMA - Museum of Modern Art, Bibliothèque Nationale de France, Center for Creative Photography, ICP - International Center of Photography). His work as presented in the phobook form is of rather classical craft, mixing landscapes, portraits, buildings and home interiors to tell the stories of the people he visits and meets. He has published "Redwood Saw" (Nazraeli Press, 2011) and "Town of C" (Stanley / Barker, 2021). © Portrait (uncreditied) taken from the  lensculture website