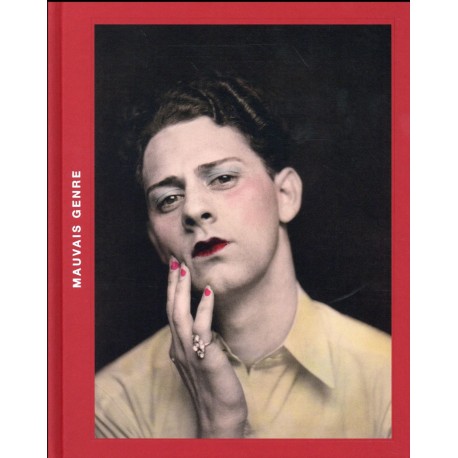 TEXTS IN FRENCH ONLY.

" Mauvais Genre presents men and women wearing wardrobe attributes of the opposite sex. Taken in a photography studio at the end of the 19th Century, or behind the scenes of the cabarets of the 1930s, in the intimacy of a bedroom or under the flashlight of a Polaroid camera, neatly posed or completely wild, these photographs  form a collection that is as quirky as it is invaluable.

Found in yard sales and on the Internet by Sébastien Lifshitz, these images tell of broken identities that have found in wardrobe transgression the instrument of their liberty. They remind us as well to what extent (and with what significance) the way one dresses has reflected a norm and a social order, assigning to each one their roles depending on their gender.

Blurred gender, pleasure of cross-dressing, catching and familiar beauty of snapshots... The authors of this book shed a light on this little known side, often hidden, of male / female representations, at the crossroads of private life, history of homosexuality, and history of feminist militancy. "

Texts by Christine Bard and Isabelle Bonnet, IN FRENCH ONLY. This photobook is sold out by the publisher.

This book is the catalogue of the exhibition "Mauvais Genre" conceived for the Rencontres d'Arles festival in 2016. The exhibition was shown at "Galerie Agnès b.", Paris that same year, at the Photographer's Gallery, London in 2018, and then at the Ryerson Gallery Center, Toronto in 2021.

See all the books of Textuel: 11