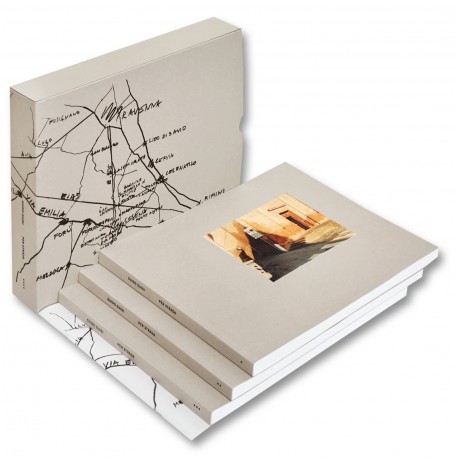 " Per Strada [In the Street] brings together photographs made by Guido Guidi from 1980 to 1994, along the Via Emilia – an ancient Italian road connecting Milan with the Adriatic Sea, which passes close to Guidi's home. To this day, the Via Emilia is the territorial backbone of the Southern tier of the Po Valley, running through mid-size cities such as Parma, Reggio Emilia, Modena, Bologna, Forlì, and Rimini.

Using an 8x10 inch camera, Guidi directs his lens towards the « interstices » between cities rather than on historical centres. His three-volume book charts a rich palimpsest of signs in the landscape built from centuries of residential, agricultural, industrial, and commercial activity.

Guidi's project on the Via Emilia began in the environs of his hometown, Cesena. For the Italian artist, photographing everyday landscapes is a way to acknowledge the importance of the vernacular, but also to break free from one’s own stereotypes, ideas, and constraints.

As he has stated, « At a certain moment I felt pushed to leave my room, like in Wim Wenders' film The Wrong Move (1975), when Wilhelm breaks the windowpane with the palm of his hand and leaves the house. I leave the house and what do I find? A house, an entrance door, a woman who passes by or who asks me something. »

Photographs from this book were partly published in a book made in collaboration with Luigi Ghirri and edited by Guidi, Due fotografi per il Teatro Bonci (1983). The body of work continued with individual and collective projects, including the 1986 group exhibition Esplorazioni sulla Via Emilia. "

Three paperback volumes each with tipped-in-image and a bilingual booklet [with Guido Guidi in conversation], all housed together in a printed slipcase.

All the copies of this book were signed by Guido Guidi. The copy offered has been open for browsing by yours truly (blister slit-open), it is new and in mint condition. 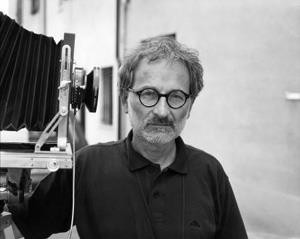 Guido Guidi is an Italian photographer and teacher. Excerpt from a biography on the website of Fondation Henri Cartier-Bresson : « Guido Guidi was trained as an architect. After various early experiments with black-and-white photography at the end of the 1960s, he began using colour negatives in a large-format camera. » His career, spanning over more than 40 years, has focused on rural and suburban landscapes, specifically in Italy, but also in Europe at large. Guidi has published many books, starting in the 80's. The publisher MACK is collaborating with the artist on his archive and they have published - amont others - "Préganziol, 1983" (2013), "Veramente" (2014), "Per Strada" (2018), "In Sardegna" and "In Veneto 1984-89" (2019), "Tra l'altro 1976-81" and "Lunario" (2020), "Cinque Viaggi" (2021). © Portrait taken from the artist's Facebook page
See all the books of Guidi, Guido: 4