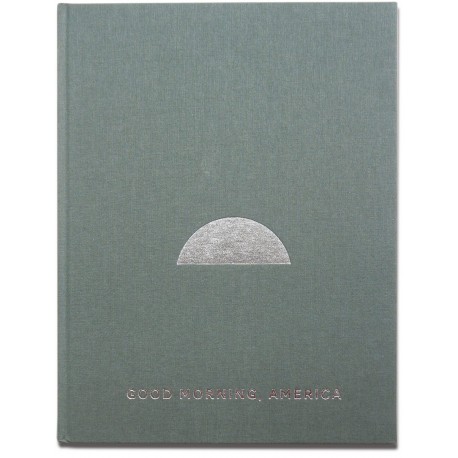 "Good Morning, America (Volume II) is the second in an ongoing series of five books by photographer Mark Power– a visual narrative of a country in the midst of change. This 10-year project is a personal and timely exploration of both the American cultural and physical landscape, and the divergence of reality and myth.

Since completing the first book, Power has travelled to rural locations where farming is the dominant industry, from the Great Plains of the Dakotas and Montana to the snowbound terrain of the Pacific Northwest. He also visited the Californian border with Mexico and made a return to the Rust Belt– more overtly politically-charged regions.

Since the books are being published as work-in-progress, while Power continues to make frequent further trips, the photographs in this series are organised neither by geography nor by subject. Instead, Good Morning, America (Volume II) continues to draw on photographs made from the very beginning of the project in 2012, alongside more recent photographs of the past few months.

« I have a keen sense that I'm assembling a large and complicated jigsaw puzzle with little idea of what the final picture will be. Nevertheless, America continues to enthrall and frustrate me in equal measure... over the decades I've learned that separating projects—America in this case—into single 'micro-subjects' doesn't sit comfortably with me. The world is too complicated for that Instead, I continue to collect pictures of many subjects that seem to me to be interconnected. I might suggest that this is the easy part; making sense of what I'm doing, by editing an already overwhelming body of work into sequences that begin to speak ofwhat -I've seen, is more difficult. »

Power is from a generation who grew up in the English suburbs of the 1960s, enchanted by the numerous TV shows that crossed the Atlantic from the US, and in particular the allure and myth of the Western. When he began photographing in the US, Power began to search for this mythical landscape, even though he knew in his heart it had probably never existed at all. This, combined with Power's position as an outsider, a foreigner traveling to and from the country, this photographic survey presents a unique and ever-shifting perspective on a complicated time in America's history. "