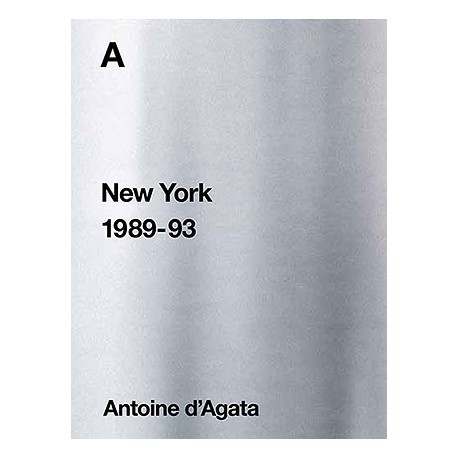 "This booklet is the first in a series of twelve that opens up the space for A's journeys, his physical journey through his wanderings, his excesses, his strained progress, his encounters. They will appear over the next five years, at a sustained rhythm.

The form, if it can be startling at first, spins the redeployment of this road, started one day and which seems to have no end. It is necessary to imagine this libretto, related to the leporello, unfolding in a throw of images, presence, unravelling of situations, temporary suspensions. It is not a chronology, even if the images are gathered in sequential plans, here New York 1989-1993 : it is each time an ambience, an atmosphere, a climate which are given in a whirl of images, a confronting mixture that creates tension, unloads a force and calls for entering into the energy and desire for life that emanate from it.

(...)   But who is A? A "hypothetical alter-ego" entered at one point in the life of Antoine, a virtual character of a performance and an assumed fiction that allows him to go where he would not go himself. And what about Antoine, attached to the life of A that he built, he says, as a scenario that he concentrate on living for the sole purpose of accumulating the photographic evidence of his existence.

The function of A is to act, he forces his hand, he pushes him to go further than he would alone. Coupled existences, where one pushes the other who dictates, prescribes protocols of action which are immediately deconstructed, "perverted" (dixit Antoine d'Agata), where one lives in an accomplishment of the other, where one can not exist without the virtuality of the other.

Forced twinning, necessary, which is played out and replayed over again, entanglement, disorder, the accumulation of extreme adventures, sought after, experienced.

... New York 1989-1993. Situation 1. First traces of an existence that engages in way of living and holds fast, at all costs because "there is no other way out than life itself," says Antoine. Images of a position that will only be clarified over the twelve booklets.

Texts by Christine Delory-Momberger and Antoine d'Agata in French only.