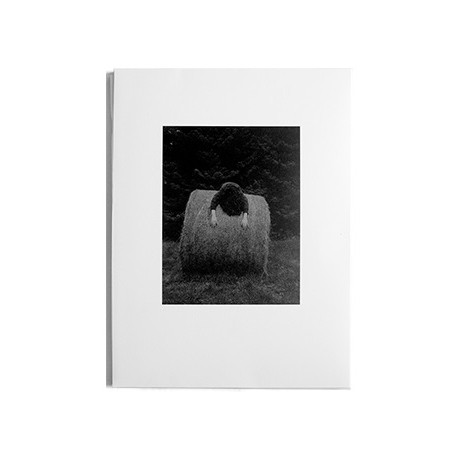 .Back in stock (second edition).

The book bears both Catalan & French titles "La Gravetat del Lloc / La pesanteur du lieu" and can be translated as "The Gravity of Place".

The Gravity of Place is a project made during Israel Ariño’s artist’s residency at Domaine de Kerguéhennec in Brittany. Kerguéhennec is a contemporary art centre that has over thirty sculptures installed in its surrounding landscape. The place, where other artists have previously left their mark, is charged with memory and meaning.

The series explores the concept of ‘place’ as the essence of emotional connection through darkness, the limits of what is representable and the perception of reality. Night appears as an object of discovery, mystery and pleasure, a hieroglyphic space that leads us to imagine something more that what we are actually seeing. We enter the terrain of the mind, the imperceptible, chance findings. In short, this proposal is sensorial rather than rational, filled with intangible elements that gradually appear and disappear as the pages are turned.

This work has been published thanks to the support of the Département du Morbihan in the frame of Israel Ariño’s artist’s residency at Domaine de Kerguéhennec in October and November 2016. It has also received backing of Galerie VU and Grisart."

PLEASE NOTE: We are now offering signed copies of the second edition of this book. The first one had a soft cardboard slipcase, not present in the second, which has a softcover cover with French flaps.