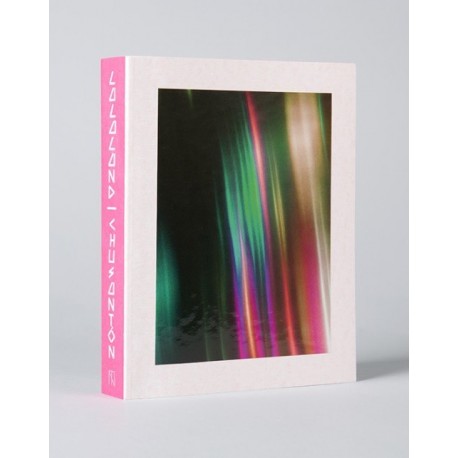 "La La Land is the first book by photographer Chus Antón, but more than a photobook it is a travel book. Not a travel guide, although it is that too, but a travel book in the Petrarca’s Mont Ventoux tradition. Travelling to live things, travelling to tell things, and above all travelling to see things. I want to climb that mountain. I want to see it with my own eyes.

Chus is and has always been an irredeemable mythomaniac, so he travelled to Los Angeles to re-live its legends, follow their paths, and feel their presence, their absence, their energy. He needed to overcome the barrier between the mental and the physical space, to capture those sites present in the collective imagination in a stark way, without any embellishments.

However, when the brutal efficacy of his clinical look dialogues with the texts written by Cristian Rodríguez, partner in crime and in travel together with Lorena Quintana, we see that the idea is prevalent over objectivity itself. A non-important wall changes completely when we are told that it was the background of Michael Jackson’s Thriller music video, or behind which the recording of the Stooges’ Fun House took place, or hid the murder of Sam Cooke.

In an exercise of photographic theory much more relevant than could appear at first sight, La La Land proves that an image is not the same with or without that extra information. Can an idea alter an image? Which of the two is then the real one, the one hiding its significance or the one accompanying it? What is the image without the words? What is the difference between the image and the idea it contains?"

A book that offers multiple points of entry... The photography work of course, the travel guide as indicated above, the frenzy of the collector, the love of history through the anecdotes. A very original idea, a successful project !

Included, a map with the locations of the places in the photographs.