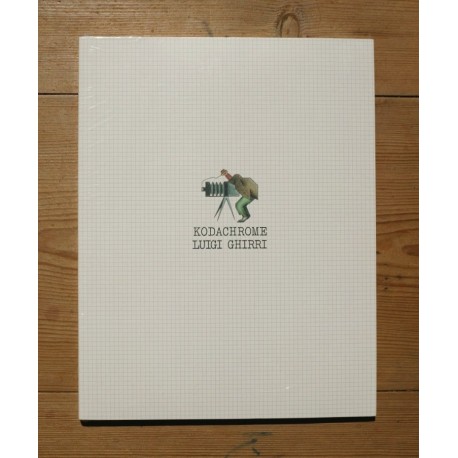 " In 1978 Luigi Ghirri self-published his first book, an avant-garde manifesto for the medium of photography and a landmark in his own remarkable oeuvre. Kodachrome has long been out of print and on the 20th anniversary of Ghirri's death, MACK is proud to publish the second edition.

« Ghirri fights to maintain our ability to see. His works are powerful devices for the re-education of the gaze. They alter the perception we have of the world without proposing a single path to follow, rather they provide us with the tools we need to find the one we're looking for. »
--  Francesco Zanot

Part amateur photo-album, Ghirri presents his surroundings in tightly cropped images, making photographs of photographs and recording the Italian landscape through it's adverts, postcards, potted plants, walls, windows, and people. His work is deadpan, reflecting a dry wit, and is a continuous engagement with the subject of reality and of landscape as a snapshot of our interaction with the world.

This new edition of Kodachrome is published as a facsimile of the original, adopting the original design, text layout and image sequence, but using new image files scanned from Ghirri's original film to take advantage of modern technology and printing methods. A small booklet is included with an essay by Francesco Zanot, which offers a contemporary perspective on the historical impact of Kodachrome, alongside French and German translations of the original texts from the book (which were published in English and Italian).

« The daily encounter with reality, the fictions, the surrogates, the ambiguous, poetic or alienating aspects, all seem to preclude any way out of the labyrinth, the walls of which are ever more illusory… to the point at which we might merge with them… The meaning that I am trying to render through my work is a verification of how it is still possible to desire and face a path of knowledge, to be able finally to distinguish the precise identity of man, things, life, from the image of man, things, and life. »
--  Luigi Ghirri "

Second edition, published by MACK in 2012. The 1978 original edition (published by Contrejour in France ans Punto e Virgola in Italy) is featured in  "The Photobook: A History volume I" by Martin Parr & Gerry Badger (p. 231).

A tipped-in booklet gathers the essays by Luigi Ghirri and Gianni Berengo Gardin from the original edition, and a new essay by Francesco Zanot. All the texts are available in English, French and German.

Luigi Ghirri was an Italian photographer, deceased prematurely at the age of 49 in 1992. A self-taught photographer, he mostly worked in the public space and documented the Italy of the 1970s &amp; 1980s, in color. Many of the books published during his lifetime, including the first one "Kodachrome" (1978) -and all the ones in the French language- were published by Contrejour, a publishing house created and managed by his long-time friend and photographer Claude Nori. Claude Nori published a tribute photobook to his friend titled "Luigi Ghirri l'amico infinito" in 2019. MACK are-published "Kodachrome" in 2012, then published several other photobooks of the works of Ghirri, including "The Map and the Territory" / "Cartes et Territoires" for an exhibition at Jeu de Paume, Paris (2018), "Per Strada" (2018) and "Colazione sull'Erba" (2019) and a book of texts; "The Complete Essays 1973–1991" (2016). © Portrait by Claude Nori, in the book "Ghirri, l'amico infinito"
See all the books of Ghirri, Luigi: 3