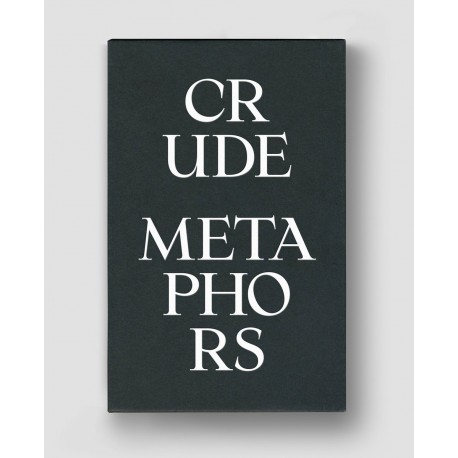 "To celebrate the 10th anniversary of "Crude Metaphors", a prominent and celebrated section of HOTSHOE magazine since 2005, HOTSHOE is publishing a very special limited edition collectors box of five books featuring a selection of the most renowned photographers of today, including Roger Ballen, Todd Hido, Edgar Martins, Mayumi Hosokura and Esther Teichmann.

Crude Metaphors brings together photography and fiction writing, pairing a photographer and a writer to produce a narrative, written in response to a chosen series of images.

The beautifully designed collection of books, to be released on 12th November will combine the greats of photography with established and up and coming writers such as the National Poet for Scotland Liz Lochhead, and Joe Ahearne, director of Doctor Who and co-writer of Danny Boyle’s Trance.

With stories ranging from a female bounty hunter to a world of artificial intelligence and a father’s suicide, readers will be taken on five compelling journeys through the words and images of ten different creators."

Book 1 of 5 - "After Her" : Photographs by Todd Hido & Texts by Amanda Schiff

Book 3 of 5 - "A Dark Sky" : Photographs by Edgar Martins & Texts by Joe Ahearne

Books presenting the work of a group of photographers, either working on a common project, or assembled by the publisher for the purpose of the book.
See all the books of Collectif: 63