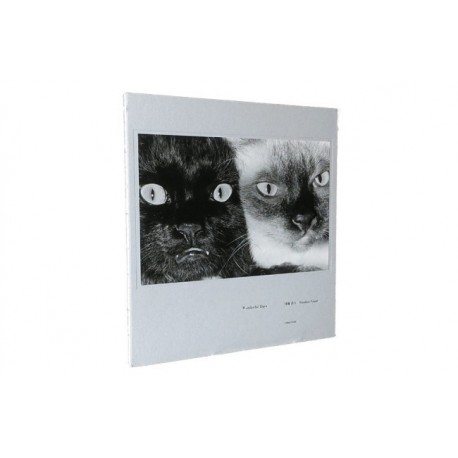 In 1964, Fukase and Yoko moved into the Matsubara Danchi housing complex. As they began life as a newly married couple, Fukase decided one day that he wanted a pet cat. During a stroll near his apartment, he met a neighbor who owned a seal point Siamese cat. The neighbor gave Fukase one of its kittens. He named the kitten Kabo. Every time Yoko came home from an outing, Kabo liked to jump onto her lap and sharpen his claws on the obi belt of her kimono.

Although Fukase finally attained his dream of living with a cat, unfortunately Kabo became more attached to Yoko. Frustrated, a few years later Fukase fell in love at first sight with a tiny black long-haired kitten at an angler’s hut where he often went to fish for herabuna, a Japanese crucian carp – a hobby of his at the time. He tucked the kitten in his fishing jacket and brought it home. Since then he would be seen doting on this cat, which he named Hebo, and repeating the words “Hebo is all mine.” At times Hebo would act like a dog, fetching small pieces of kamaboko fish cakes cut into squares that Fukase threw, and bringing them back to his owner. The cat also enjoyed gazing out of the window of their apartment.

After Fukase and Yoko’s divorce in 1976, Fukase left the Matsubara complex for good. Yoko’s mother Kazuko Wanibe, who had been living with the couple at the time, continued to take care of Kabo and Hebo until the end."